The government of British Columbia in Canada has issued two tenders for improvements to the Alex Fraser Bridge.

One is a new project to install a cable collar system for ice removal. The second is for elements of a US$55 million project to improve capacity of the bridge.

The tender for the cable collar system closes in mid-September, with the new system expected to be in place on the Alex Fraser Bridge by the end of December. The system will be similar to the one used successfully to remove snow and ice from the Port Mann Bridge’s cables, but will be operated manually from the bridge to ensure its effectiveness. This project is valued at approximately US$4 million.

The same contract will include initial work on the Alex Fraser Bridge capacity-improvement project. This includes replacing the existing fixed median barrier with a temporary concrete median barrier in support of expanding the number of travel lanes on the bridge to seven.

As part of that project, the ministry is also in the process of procuring a moveable barrier system, including barrier transfer machines, to allow the direction of traffic flow to be changed in rush hours. Additional work to complete the project will be tendered this autumn. 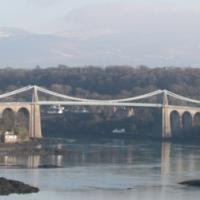 Menai Bridge hangers to be replaced

Menai Bridge hangers to be replaced