The Wellsburg Bridge has been lifted into place over the Ohio River in an operation that is claimed to have broken US records.

Mammoet and Flatiron Construction have completed the float and lift of the main span of the tied-arch bridge, which is being built to connect Wellsburg in West Virginia and Brilliant in Ohio.

The companies said that it is the heaviest floating bridge lift ever executed in the USA and that floating a bridge had never been done before in West Virginia. 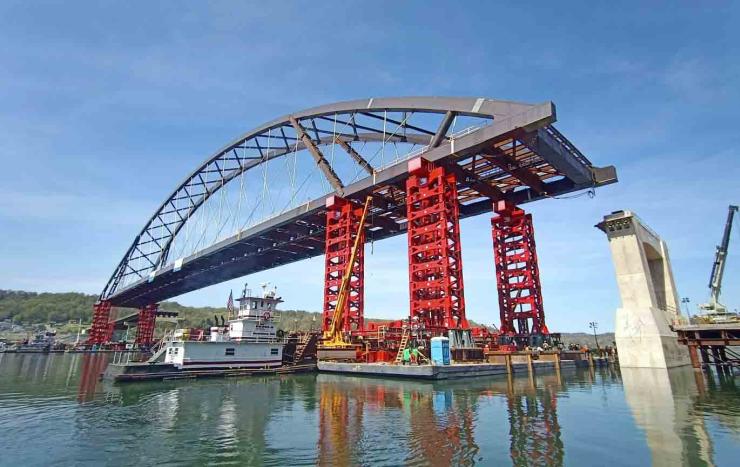 The operation used Mammoet’s Mega Jack system to jack-up and install the 3,870t bridge. The overall length of the bridge is more than 252m. Mammoet said that the use of its Mega Jack system minimised disturbance for ships on the river as the work could be completed in a maximum of two days. An alternative strand jacking method would have the bridge hanging on strand jacks for at least two weeks.

Flatiron Construction opted for using Mega Jacks due to increased efficiency, reduced disturbance, and a more controlled method which offered a higher level of safety. This was the first time the Mega Jack 5200 system was used on a barge, and the first time the system of this type and capacity was used in the USA.

Mammoet mobilised eight Mega Jack 5200 towers and eight 500t strand jacks and installed the equipment onto four prepared barges in New Orleans, Louisiana. Flatiron Construction floated the barges to Wellsburg, West Virginia, where Mammoet then took over the load of the bridge on its Mega Jack system.

Next, the jack-down operation was carried out to position the bridge on its bearings and to allow the barges to be floated away.

Mammoet said that the system provided advantages, such as allowing the bridge to be built at ground level and allowing it to be safely jacked-up while loaded on the barge - bringing the bridge to the elevation required for installation. Therefore, all jacking works could be executed at a lower level and the need to work at height was reduced. 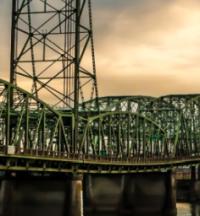 Planning to restart for Washington-Oregon bridge