The Welsh government has announced that construction of the new Dyfi Bridge near Machynlleth is set to begin in March.

Contractor Alun Griffiths will build a viaduct across the floodplain and a river bridge across the Afon Dyfi approximately 480m upstream of the existing bridge. 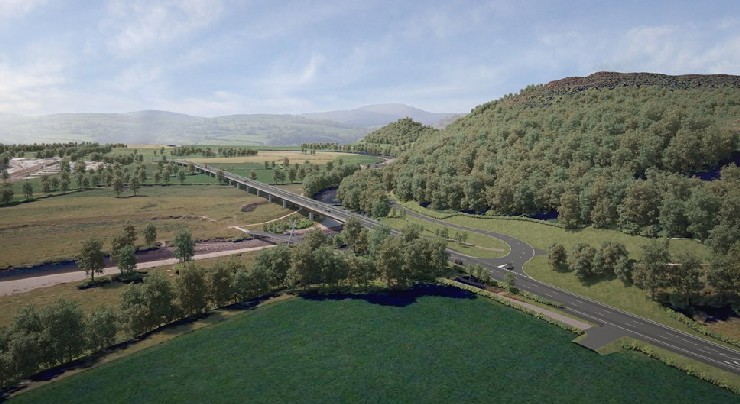 The current 19th-century bridge is frequently closed due to flooding.

Transport minister Ken Skates said: “I am pleased to be able to announce that construction will begin next month on this much needed scheme.  As well as being a key route between North and South Wales, the A487 is an important link between communities locally.  All too often these communities can find themselves isolated because of flooding at Dyfi Bridge and this must be addressed.

“The new bridge will also make public transport more reliable, allowing people to access important services in Machynlleth and further afield.  The existing listed 19th century stone bridge will continue to be an important asset for the area as an active travel route in the beautiful Dyfi valley benefiting locals and visitors alike.”

Alun Griffiths executive director Martyn Evans said: “We are delighted to be working with Welsh Government to deliver these important improvements to the A487, making the route more resilient and reliable during flooding events. The new viaduct across the Dyfi Valley will also help to preserve the long-term integrity of the existing Dyfi Bridge, which is a Grade II Scheduled Ancient Monument.”

The go-ahead was given for the Dyfi Bridge in January last year (link opens in new tab). Work has been done to ensure construction can now begin while complying with Covid-19 regulations.  The new Dyfi Bridge is expected to be completed by spring 2023.

Bay Bridge celebrates topping out with placing of giant saddle

Bay Bridge celebrates topping out with placing of giant saddle