Thermal effects required a three-phase concrete pour for the central section of the deck completed this month.

The 996m-long Almonte Viaduct will carry high-speed trains over the Almonte River at the point where it flows into the Alcántara Reservoir in Cáceres, some 340km south-west of Madrid. Its 384m-long arch span makes it one of the longest concrete arch bridges in the world. 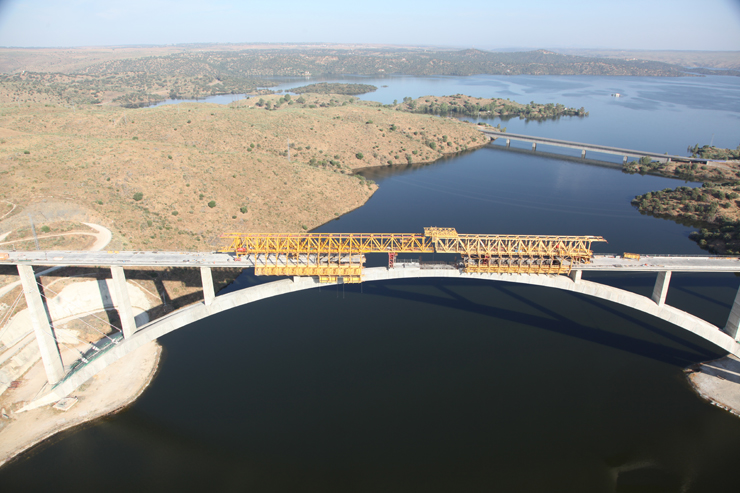 The deck was formed with two overhead travelling gantries moving simultaneously on each side to avoid asymmetric forces over the arch. Temporary steel beams were placed on the piers resting on the launching sections of the arch to restrain the longitudinal movement of the deck during its construction.

Speaking with Bd&e, FCC engineer David Arribas explained some of the challenges involved in casting the final, 30m-long section of the deck, which joins the arch crown along a 17m-long single section: “To pour the central section it was necessary to consider the daily longitudinal movements caused by thermal effect on the two sides of the deck, as well as the vertical movement of the arch crown, also caused by thermal effects.”

To overcome these effects the construction process had to be divided into three phases, which were carried out over a two-week period. In the first phase, a 26.8m section centred over the arch crown was poured, leaving a 1.6m gap on each side. Next, temporary blocks were placed in those gaps to counter the relative movements of the two side sections of the deck and the central section. These blocks, comprising steel structures, were installed very early in the morning to avoid the daily thermal movements of the structure. Following their installation, the steel longitudinal beams in the main piers restraining the deck were then removed. The two remaining 1.6m segments of the deck were then successfully cast. 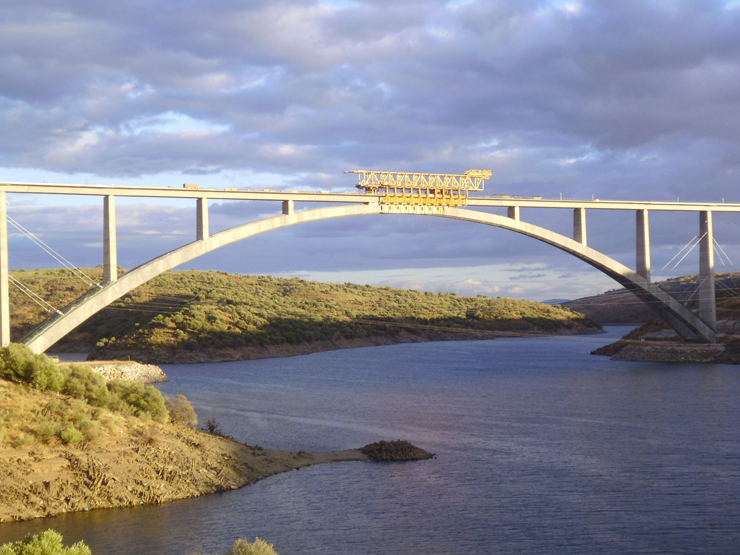 The Almonte Viaduct has been built by a joint venture consisting of FCC Construcción and Conduril for the state-owned Spanish railway infrastructure administrator Adif, which reports to the Ministry of Development. It is part of a larger US$110 million project that encompasses three other bridges on a 6.3km-long route of double high-speed track in Garrovillas de Alconétar near Cáceres.