A section of viaduct under construction in Manila in the Philippines has collapsed following a fire in a nearby building.

The fire broke out on 1 February close to the Skyway Stage 3 project in an industrial building that contained plastics. The Manila Public Information Office later reported that the fire had been brought under control. Some 50 fire trucks had been used to put out the blaze. 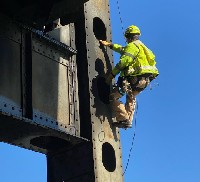