Firm chosen for replacement of collapsed Chirajara Bridge in Colombia

The new 446m-long cable-stayed bridge around 100km southeast of Bogota replaces a previous structure that collapsed during construction on 15 January this year, killing ten workers and injuring another eight. A study by Modjeski & Masters had concluded that the design was to blame for the collapse of the bridge (click here to read more).

The new cable-stayed structure, which will be built in the same location as the previous one, has a main span of 286m supported by two V-shaped piers. According to Eiffage, the project involves four months of preliminary studies and 18.5 months' work, for a US$21.5-million budget. 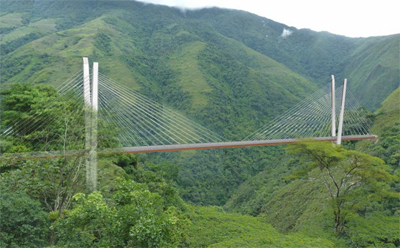 Work starts on Phu My Bridge

Work starts on Phu My Bridge