The first of the twin cable-stayed structures making up the new Goethals Bridge in the USA has opened to traffic.

The original 89-year-old cantilever structure has now been taken out of service and will be demolished, enabling completion of the second half of the new bridge. Traffic in both the New York and New Jersey directions is now using the first half of the new crossing. The two directions will be separated once the second, parallel structure opens next year.

The new cable-stayed bridge is being constructed directly south of the original crossing. The US$1.5 billion project is being built under a public-private partnership by NYNJ Link Developer, made up of Macquarie Infrastructure & Real Assets and Kiewit Development, together with lead contractors Kiewit Infrastructure, Weeks Marine and Massman Construction. Client for the scheme is the Port Authority of New York & New Jersey.

"This is the first major, new bridge erected in New Jersey in decades and it was long overdue, as anyone who navigated the old Goethals Bridge can attest," said New York state governor Andrew Cuomo. "Drivers have been nervously gripping the steering wheel of their cars just to stay in the narrow lanes designed in the1920s for the nation's first generation of automobiles. The new twin-crossings, constructed next to the ageing span, represent a critical infrastructure upgrade as well as a smarter approach to these types of projects." He added that building it under a public-private partnership resulted in a swifter project completion than had it been carried out solely by the public sector. 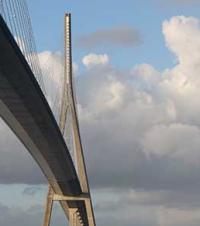