Florida Department of Transportation in the USA has unveiled a revised plan to expand capacity of the 4.8km-long Howard Frankland Bridge.

The new plan will construct a southbound bridge that will carry four general-use lanes and two express lanes in each direction. It also includes a bicycle/pedestrian trail. The bridge will be designed with a structure strong enough to accommodate future light rail. The existing southbound structure will be converted to northbound; the existing northbound bridge will be demolished.

It replaces a plan announced in January this year that called for the demolition of the existing northbound bridge, conversion of the existing southbound bridge to carry four northbound general-use lanes and construction of a new-six lane bridge to carry four southbound general use lanes as well as one express lane in each direction. 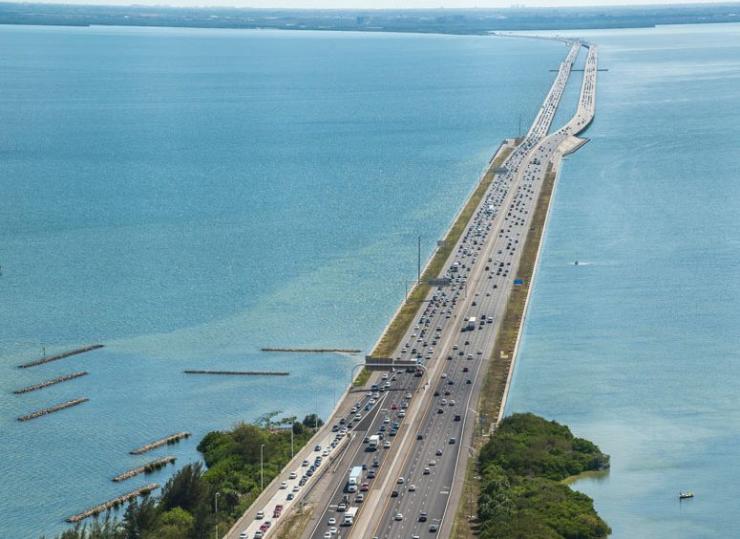 “These changes improve the previous design proposed for the Howard Frankland bridge and they incorporate feedback from the community and local partners related to safety, transit, bicycle and pedestrian options, and future transportation needs,” said FDOT District Seven secretary David Gwynn. “With Hurricane Irma evacuations fresh in our minds and the need to accommodate the growing demand in the Tampa Bay Region, this new design not only improves safety and mobility, but continues to enhance multimodal opportunities and choices.”

Adoption of the new design will bring a number of benefits, including the ability to accommodate light rail in the future without needing to construct a third bridge as called for in the previous plan. All that would be needed would be to widen the existing southbound bridge and shift some of the travel lanes to the widened bridge, which would be more cost efficient and cause less impact on the environment.

The new design will also provide improved incident management in emergencies and more capacity for hurricane evacuation. In the aftermath of Hurricane Irma, this is seen as particularly important for coastal Pinellas County, the most densely populated county in Florida. Further benefits would come through enabling improved operations of express bus services and making it easier to accommodate a possible transit system in future. The inclusion of the bicycle/pedestrian trail reflects community requests.

This new design would accommodate future demand at a much lower cost than adding lanes as part of future construction, reviews found. The additional express lane in each direction are also seen as offering better preparation of the bridge for the potential of autonomous vehicles, in line with predictions that these may initially operate in dedicated lanes.

The proposal for what will be built in 2020: 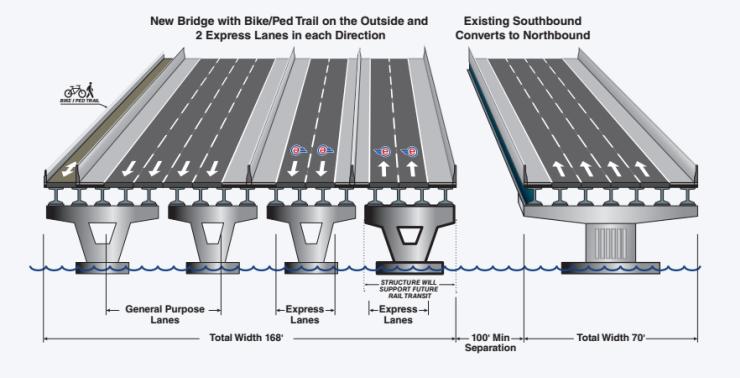 How rail would be accommodated in the future:

FDOT is carrying out further public outreach this week ahead of the Howard Frankland Bridge public hearing, which is scheduled for mid-November.