Winners of the Bridge design & engineering

Footbridge Awards 2008 were recognised in a special awards presentation evening at the Footbridge 2008 conference in Portugal. Engineers, architects and owners representing seven winning footbridge projects and 12 highly commended projects collected their trophies and certificates at the event, which was held in the beautiful Alfândega building on the riverfront in the centre of Porto.

All winning projects received a specially-designed trophy, and all parties involved in the projects that made it through to the finals received a certificate of their achievement.

Winning projects were represented by delegates from eight European countries, as well as delegates who travelled all the way from South Africa and Australia to attend the event.

Highly-commended: The Wing, Almere, The Netherlands and the University of Limerick 'Living Bridge', Ireland. 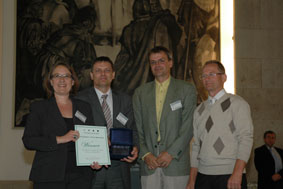 Representatives of the Studenci Bridge in Maribor, Slovenia, which was joint winner of the technical medium-span category. 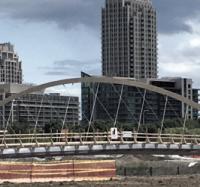