The USA’s National Transportation Safety Board has issued preliminary information on the collapse of the Fern Hollow Bridge in Pittsburgh.

The 136m-long bridge failed on 28 January, falling approximately 30m into the park below. At the time of the collapse, an articulated bus and four passenger vehicles were on the bridge. A fifth passenger vehicle drove off the east bridge abutment following the collapse and came to rest on its roof on the exposed ground below. As a result, 10 vehicle occupants sustained injuries. 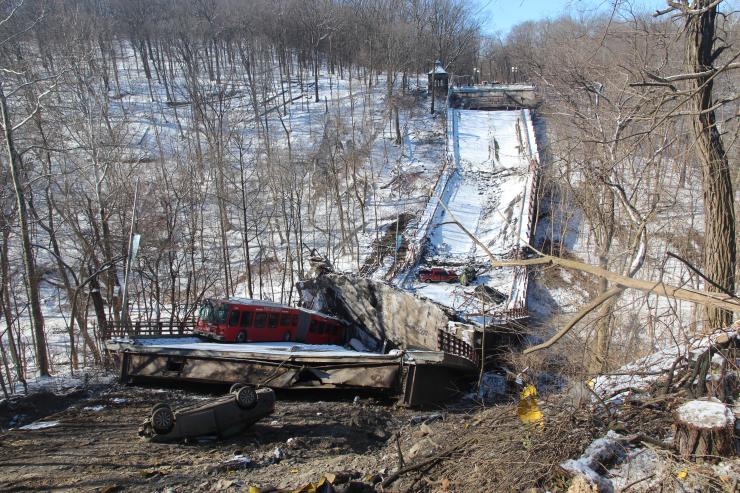 Above: The collapsed Fern Hollow bridge, as viewed from the east approach, showing the transit bus and four of the five passenger vehicles

In the area of the collapse, Forbes Avenue is a four-lane, non-divided roadway consisting of two travel lanes each in the eastbound and westbound directions. Sidewalks flanked the travel lanes on both sides. The posted posted weight limit on the bridge was 26 tons (23.6 tonnes). At the time of the collapse, it was snowing, and some snow had accumulated on the roadway and bridge surfaces.

The bridge was an uncoated weathering steel, three-span, continuous rigid K-frame structure with two welded steel girders, welded steel floor beams, and rolled steel stringers. The ends of the structure rested on reinforced concrete caps on stone masonry abutments. Each girder was additionally supported by two inclined, welded steel frame legs, also made of uncoated weathering steel, which rested atop reinforced concrete thrust blocks. Although certain areas of the welded steel girders were identified as being fracture critical, no primary fractures were found in these areas.

Initial assessment of bridge components indicates that the collapse initiated at the west end of the structure. Further examination will be performed as debris from the bridge is removed and unobstructed access becomes available. 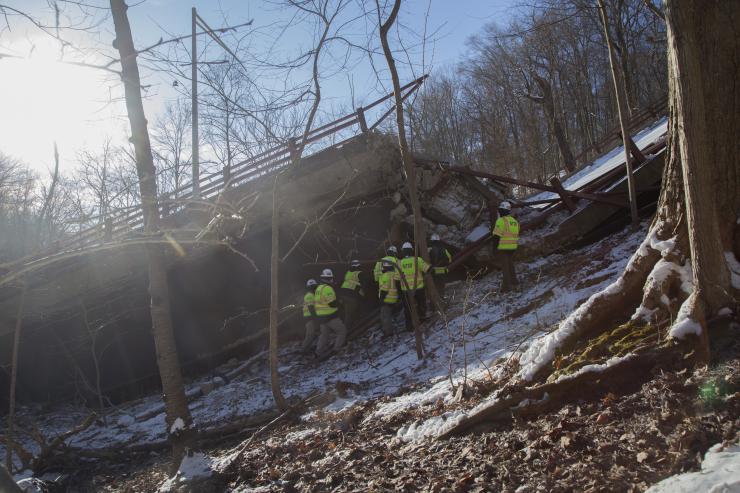 Above: NTSB investigators at the site of the collapsed bridge (source: James Anderson, NTSB)

The NTSB investigation is being assisted in its investigation by the Federal Highway Administration, Pennsylvania Department of Transportation, the City of Pittsburgh and the Port Authority of Allegheny County.

NTSB is evaluating the design of the bridge, its condition at the time of the collapse, its maintenance and rehabilitation history, and its inspection and load rating history. As the investigation progresses, the NTSB plans to conduct forensic examination of several of the bridge’s structural components. It said that the recovery of evidence, including extraction and documentation, is expected to be a lengthy process. NTSB added that all aspects of the collapse remain under investigation while it determines the probable cause, with the intent of issuing safety recommendations to prevent similar events. 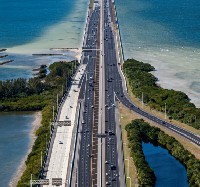