The findings have been published of an investigation carried out into last month’s collapse of the Geldenhuys Pedestrian Bridge.

An impact force on the pier in the median of the highway caused the collapse of the bridge on the N3, found the investigation carried out for the South African National Roads Agency (SANRAL) by Superstructure Consulting Engineers.

The collapse happened in the early hours of 9 August. Vehicles were crumpled by the falling bridge; those inside narrowly escaped being killed (link opens in new tab).

"Following the incident, SANRAL commissioned Superstructure Consulting Engineers to perform an independent investigation into the cause of the collapse. The firm has completed the investigation and handed its report to SANRAL," the roads agency's acting engineering executive Louw Kannemeyer said.

All evidence suggests the impact was caused by an 18.1t coil of steel that was found lying 100m north of the collapsed bridge on the N3 northbound road. Marks on the road led directly from the point of impact to the position where the steel coil came to rest.

The weight of the coil of steel and the speed at which it was moving meant that it was able to induce an impact force far in excess of the pier's capacity. Debris that scattered radially away from the pier was hit to a distance exceeding 40m; this confirms an external impact force of very large magnitude, the investigators found. The report indicated the force involved was far in excess of the design requirements of the bridge.

Although the structure was no longer in use, it remained on SANRAL's Bridge Management System and it was inspected as part of the roads agency's general bridge inspection programme. The last inspection was conducted in July 2016 and picked up no items of concern on the main structural elements. All defects were designated as minor and irrelevant by the bridge inspector, who is a professional engineer with several years of bridge design experience, said SANRAL. The handrails were missing, but as the bridge was no longer in use and cordoned off, this was of no concern.

"Several speculations about the cause of the collapse were proffered immediately after the incident had occurred and these included seismic effects, explosives and illegal underground mining in the area," said Kannemeyer. "The consulting engineers identified all possibilities and then ruled them out systematically until the actual cause was identified." 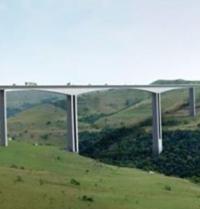 Accident on bridge under construction in Colombia results in five deaths