The 76-year-old Sarah Mildred Long Bridge in the US state of Maine has been permanently closed to traffic following a major mechanical failure of the lifting span.

The bridge was already scheduled to close permanently on 1 November to make way for continuing construction of its replacement, which is on schedule to open in September 2017.

New Hampshire Department of Transportation (NHDOT) and Maine Department of Transportation (MaineDOT) engineers consulted with specialists in moveable bridges before taking the decision to close the existing structure. They concluded that the bridge would not be safe for routine operation without complicated and extensive repairs. The estimated cost of the repairs is upwards of US$1 million and they would take more than six weeks to complete - meaning that the bridge would only return to use for a very short time before the planned permanent closure.

The mechanical issue in the south bridge tower was discovered on the morning of 21 August. Engineers were able to lift the bridge to the "up" position on 22 August to accommodate marine traffic. Keeping the bridge in this position meets a federal requirement that requires a bridge to be accessible to marine traffic at all times. 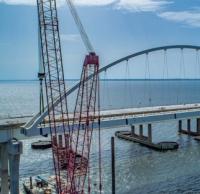