Crane lifts are now under way for a US$17 million enclosed footbridge at Perth Airport in Australia.

The 280m-long Skybridge, which is being delivered by Georgiou Group under a design-build contract, will connect Airport Central Station to Terminal 1.

The modular bridge will be installed in sections, with crane lifts required to hoist the 12 main components into place.

It is being built as part of the Forrestfield-Airport Link project, which is due to open in late 2021. Two tunnel boring machines set off from Airport Central Station in the middle of last year. Each has tunnelled under the operating airport runways, cleared the halfway point of its underground journey and installed more than 1,640 rings.

Western Australia premier Mark McGowan: "The Forrestfield-Airport Link is an important part of Metronet and will transform the way thousands of Western Australians and travellers access Perth Airport, the CBD [central business district] and the eastern foothills. About 2,000 jobs have been created on this project alone, with more than 800 people currently employed, and 70 jobs created as part of the Skybridge project.” 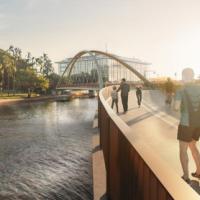 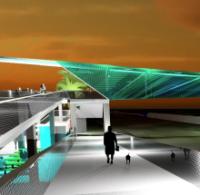