Systra Brazil and engineering firm Maia Melo have been selected as project management consultants for the Salvador-Itaparica cable-stayed bridge linking the city of Salvador to Itaparica Island in Bahia bay.

The consortium will be responsible for reviewing the detailed design assigned to Concremat/Sener as well as supervise construction of what is thought will be the longest sea cable-stayed bridge in Latin America.

The 12.4km-long crossing is regarded as key to the development of Bahia, greatly reducing travel time between the state capital Salvador and the south of the state.

A public-private partnership (PPP) contract was signed in 2020 by the State of Bahia and a consortium formed by China Railway 20th Bureau Group Corp and China Communications Construction Company. The 35-year long PPP contract includes five years for design and construction and also covers construction of a tunnel on the Salvador side and a road network on Itaparica Island. 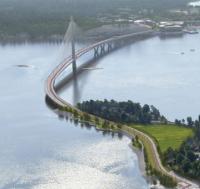