A comprehensive analysis commissioned by the UK government has found that the benefits of building a bridge or tunnel linking Great Britain and Northern Ireland could not possibly outweigh the enormous costs of the scheme. 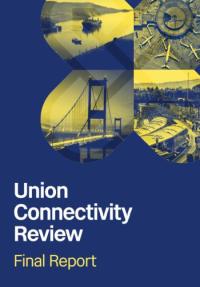 In October 2020, Sir Peter Hendy was asked by the prime minister Boris Johnson to lead the Union Connectivity Review (UCR): a detailed review of how the quality and availability of transport infrastructure can support economic growth and improve the quality of life across the whole of the UK.

In addition to the review, he has produced a companion document in the form of a standalone report on the proposed fixed link transport link between Great Britain and Northern Ireland. As part of the wider review, he had been asked to assess the technical engineering feasibility of constructing the link. The work was undertaken as a separate workstream, with technical advisors Professor Douglas Oakervee and Professor Gordon Masterton appointed to lead the study. At the same time, a partnership of Jacobs and Cowi was appointed by the Department for Transport to provide independent engineering expertise to the technical advisors.

This assessment has concluded that cutting-edge, twenty-first-century civil engineering technology would make it possible to construct either a bridge or a tunnel between Great Britain and Northern Ireland. A bridge crossing, however, would be the longest span bridge built to date, the work found. A tunnel would be the longest undersea tunnel ever built, given the limited gradients on which trains can operate, the route it would need to take and the depths it would need to reach. In addition, based on today's technology and safety considerations, a tunnel crossing could only be constructed for railway use.

The need for a railway on either a bridge or tunnel would also require significant construction to connect it to the railway network at either end, introducing some complexity since the Irish railway gauge is different from that of Great Britain.

“The consequence of these parameters for either a tunnel or a bridge is that they are expensive,” concludes Sir Peter. “The indicative cost estimate for the full route, including optimism bias (at P95), is £335bn [US$447bn] for a bridge crossing and £209bn [US$279bn] for a tunnel crossing. The bridge or tunnel, and the associated very significant works on either side for a railway and possibly for roads would take a very long time. Planning, design, parliamentary and legal processes, and construction would take nearly 30 years before the crossing could become operational, even given a smooth passage of funding and authority to proceed.

“Whilst the economic and social effects would be transformational, the costs would be impossible to justify, given the Government’s already very significant commitment to long term transport infrastructure improvement for levelling up, and the further likely significant expenditure which would result from the further studies I am suggesting in my main UCR report.

“Future transport technological advances, particularly autonomous vehicles, could allow for different tunnel and bridge designs, which could enable the construction of a transport link and approaches at a lower cost. For now, though, the benefits could not possibly outweigh the costs to the public purse. It is therefore my recommendation to Government that further work on the fixed link should not progress beyond this feasibility study.”

Despite his recommendation, Sir Peter said that he is clear that it was an excellent question to ask. “For many decades, politicians and engineers have debated this proposal, but have done so without the evidence to show whether it was possible and, if so, what it would take to do it,” he said. “This is the first comprehensive, conclusive study on the subject since the idea was first mooted over 150 years ago.”