The link to China is expected to lead to the establishment of a new economic cooperation area.

The Bac Luan II Bridge, which was built jointly and is co-owned by China and Vietnam, is 618m long and 27.7m wide. It crosses the Beilun River and is located around 3km from the pre-existing Bac Luan Bridge I, which links the city of Mong Cai in Vietnam’s northern province of Quang Ninh and the city of Dognxing in Guangxi, south central China.

Built at a cost of US$15 million, the new four-lane bridge will ease traffic on the Bac Luan Bridge I, promote trade and tourism as well as help establish a bilateral economic cooperation area.

Following approval by the Vietnamese and Chinese governments in 2012, construction of the Bac Luan II Bridge was carried out by contractor Bridge 75 Joint Stock Company, with works beginning in 2014. 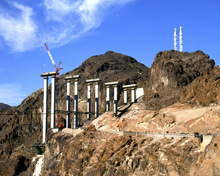