The foundation stones have been laid for two major bridges over the Brahmaputra River in Assam, India.

Roads minister Nitin Gadkari said that the bridge between Dhubri in Assam and Phulbari in Meghalaya will shorten the journey between the two places from 205km to just 19km. The four-lane Dhubri – Phulbari Bridge will cost US$685 million and its completion is due in September 2028.

A 40-span, 6.8km-long bridge is being built between Majuli and Jorhat to serve people living on Majuli Island, which is in the Brahmaputra River. The US$127 million project was awarded to UP State Bridge Corporation earlier this month, with completion due by March 2025.

Construction of the new Champlain Bridge in Montreal, Canada to begin tomorrow 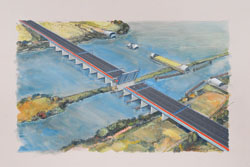 Construction of the new Champlain Bridge in Montreal, Canada to begin tomorrow