The designer has been chosen for a pedestrian and cycle bridge crossing over the River Trent in Nottingham, England.

Amey Consulting has been awarded the design of the landmark bridge. The US$12.3 million project, funded by the government’s Transforming Cities Fund, will be delivered by Nottingham City Council, working closely with Nottinghamshire County Council and Rushcliffe Borough Council.

The structure will create new links for key areas including the Waterside residential development and Colwick Country Park. The area under consideration for the bridge is to the east of Lady Bay Bridge and would connect the Trentside path at Lady Bay on the south bank to the Waterside regeneration area on the north bank.

A broad riverside walkway for pedestrians and cyclists has also been proposed; among the main considerations for the design is integration with Nottingham’s existing walking and cycling network.

Councillor Adele Williams, portfolio holder for transport at Nottingham City Council, said: “This is a really exciting opportunity to offer a new option for both commuting and recreational trips, enhancing connections between Sneinton and the green spaces and riverside paths south of the river.

“The bridge is a key component in the Waterside Regeneration area, providing infrastructure to encourage walking and cycling, including linking to the city’s existing cycling corridors. It will ultimately help to reduce unnecessary car journeys and air pollution, having a positive impact on the health and wellbeing of everyone in the city.”

Amey Consulting managing director Alex Gilbert said: “Once constructed, this new bridge and walkway will play a crucial role in encouraging active travel across Nottingham which will support a healthier population and a cleaner environment.”

The crossing is set to be completed by spring 2023. 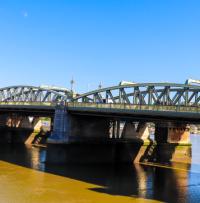