Cracks had been increasing in length daily prior to last year’s fatal collapse of a pedestrian bridge that was under construction in Florida, USA, according to newly released records.

Florida Department of Transportation (FDOT) has now posted the most requested documents on the collapse online for public access.

“The Department has been working with the NTSB to proactively get the restriction lifted,” said FDOT secretary Kevin Thibault in a statement accompanying the publication of the records on 6 May. “We support full transparency by providing all documents related to the March 2018 tragedy that impacted the South Florida community and our entire state. Lives were lost and other lives have been changed forever, and we know these families, as well as the citizens of Florida, deserve answers and want closure.

“While we have worked with NTSB allowing for the release of public records that have been requested by the media related to FIU bridge, the Department will wait to comment further until the NTSB releases the final report.”

Meeting records show that, just hours before the collapse, engineers had said that cracks in the concrete structure had been increasing in length daily. The comments were made at a meeting that started at 9am on 15 March and was attended by representatives from organisations including FDOT, FIU, contractor MCM and engineer Figg.

The notes say that Figg gave a presentation in which it assured that there was no concern with safety of the span suspended over the road and that no repairs should be done at that stage.

The meeting records a number of questions and answers that followed the presentation, including:

The released materials also include an extensive 114MB file containing any documentation with the words ‘cracks’ and/or ‘cracking’ and ‘FIU’ or ‘Florida International University’ and ‘bridge’ or ‘pedestrian’. 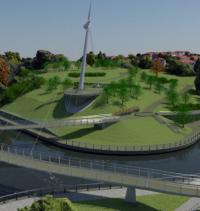