Forth Bridge bolt replacement to be fast-tracked

A total of 28 nuts on the bolt assemblies have now been found to have cracked and the need for replacement is sufficiently urgent that the ‘negotiated procedure’ is to be used, as set out under EU procurement directives.
This means the bridge authority would negotiate a contract directly with a preferred supplier rather than putting a contract out to tender. The time saved would allow work to begin before the onset of winter this year rather than next spring.

Concerns about the cable band bolt assemblies were first raised in 2007 when bridge inspectors discovered a number of cracked nuts on the ‘cable bands’ that hold the vertical hanger ropes to the main suspension cables. The cracked nuts were replaced and a sum of US$844,000 was set aside to replace all of the nuts over time using in-house labour.

However, inspections this year have revealed a further 17 cracked nuts, including three cable bands where nuts on two bolts have cracked. Emergency repairs have been scheduled and the most critical location has already been repaired. Further replacement of faulty bolt assemblies will be carried out over the next few weeks.

Engineers have now concluded that all of the cable band bolt assemblies should be redesigned and replaced as a matter of urgency.

The cost of redesigning and replacing all of the cable band bolts as well as the nuts has been estimated at US$8 million million. Transport Scotland will provide US$6.6 million and the remainder will be met from FETA’s reserves or by rescheduling other work.

Work on the replacement design will need to be completed before new nuts and bolts can be manufactured and work can begin on site.

Chief Engineer and bridgemaster Barry Colford said: “Thanks to the diligence of our bridge inspectors we are identifying these cracks soon after they occur and are able to respond quickly to implement any repairs that are required.

“Until we have replaced all of these bolt assemblies, it is quite possible that further emergency repairs will have to be carried out at short notice, requiring weekend traffic restrictions.

“So far we have been able to limit the disruption this has caused, but this would become increasingly difficult if failures occur during the winter when light and fair weather are in shorter supply. That’s why it’s critical that we replace the bolts on the worst affected areas this autumn.

“I would stress that the bridge remains perfectly safe to use – the risk that we are trying to prevent is the need for longer term lane closures that would cause unprecedented disruption.” 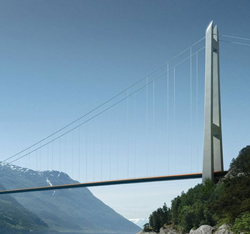