After four years of reconstruction, the 133-year-old Merchants Bridge linking Missouri and Illinois officially reopened to traffic on 15 September

The US$222 million project involved a double-track expansion of the oldest rail structure spanning the Mississippi River, allowing it to handle up to 70 trains per day while increasing speed restrictions and its vertical clearance from the water. Owner-operator, the Terminal Railroad Association (TRRA), maintained rail operations during construction on a single-track basis, with only 24 days of outages needed over the course of the programme: eight days for each of the bridge's three steel trusses.

Walsh Construction was appointed principal contractor in July 2018, while TranSystems and Burns and McDonnell were selected as project engineers. Together, Walsh and lifting specialist Mammoet rebuilt the bridge by removing and replacing all three of its trusses as well as the east approach connecting St Louis, Missouri and Venice, Illinois.

Assembly of each new span took more than four months and was undertaken on four barges moored to vertical pile casings designed to tolerate changes in the river level and strong winds.

The engineering solution behind each truss replacement comprised two large gantry systems assembled 29m over the river. Each new truss measured 158m in length and weighed 4,082t, whereas each of the existing trusses weighed less than half as much at 1,796t. Each of the newly constructed trusses was floated by barge into position, raised, and placed.

The gantry manouevering a span (Mammoet)

The truss spans were lifted using the original beaming locations and 4 x 900t strand jacks for the old bridge and 8 x 900t strand jacks for the new bridge. The sections were connected to the customer-supplied lifting lugs and lifted, skidded over laterally, and either lowered onto awaiting deck barges or lifted and skidded onto the permanent bearing pads. The beams, depending on the type, weighed 135t and 160t. Installation of both systems took one month to complete, before the lifts of the first span were conducted.

View of gantry setup from above (Mammoet)

The old truss bridge replacement was successfully completed with two separate gantry systems at the end of each span. After the installation of the new bridge section, one of the two gantry systems was relocated to the next set of piers to remove and install the next bridge section until all three were completed. 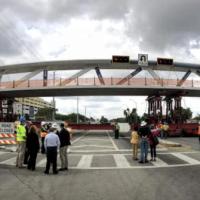