A highway in southern England was reopened 10 hours ahead of schedule following the early completion of weekend operation to install a new bridge.

The VolkerFitzpatrick-Kier joint-venture was able to reopen the A1081 early following the installation of the 80m-long, 1,000t curved bridge, which forms part of the new Luton Dart fast transit system. The fully-automated people-mover will link London Luton Airport with Luton Airport Parkway railway station.

The bridge, which will carry Dart shuttles over the A1081, was designed by Arup and Knight Architects and constructed at an offsite location over an eight-month period. It was then transported about 1km to the site using self-propelled modular transporters. The structure was raised up using jacks, positioned and lowered into place. 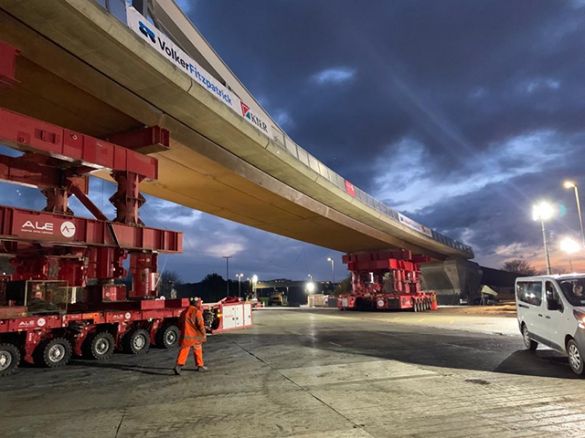 The operation was completed over the course of three days following significant planning and collaboration between VolkerFitzpatrick-Kier, London Luton Airport and Luton Council.

Luton Dart project director Phil Hobson said: “This was an especially challenging project milestone to reach and required a huge collaborative effort between all parties. The team worked incredibly well together to successfully install the bridge.”

He said that every aspect of the installation was specialised and complex, from setting up the temporary ramps to moving the bridge, which took over two hours. “Each operation over the weekend was expertly planned and we are really pleased to have reached this vital point in construction of the project,” he added.

Ciaran Scanlon, London Luton Airport programme delivery director, said: “This has been an exciting achievement and a hugely significant milestone in the delivery of the innovative Dart scheme. The whole project has been full of engineering challenges and to move an object of this size ranks as one of the biggest. To see such a large object calmly trundle down the A1081 under complete control was a great testimony to both the vision of the project and the technical expertise of our contractor, VolkerFitzpatrick-Kier.” 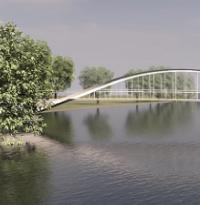