A bridge for cycling and walking has been installed in Renfrewshire, Scotland.

The bridge, which crosses the Black Cart River next to Glasgow Airport, will open to the public later this year. The 160-tonne, 100m-long steel structure is one of a series of infrastructure improvements as part of the Glasgow Airport Investment Area. The area includes a manufacturing innovation district.

Renfrewshire Council leader Iain Nicolson said: "We want everyone to enjoy the great outdoors and Renfrewshire already has excellent routes for people cycling and walking. The new bridge and all the improvements being delivered through the Glasgow Airport Investment Area project will further enhance this and encourage more people to cycle and walk, which is of course much better for our wellbeing and for the local environment."

Wills Bros Civil Engineering is the contractor delivering the project. Other companies involved include Hewson Consulting, RPS, Miller Fabrications and Mammoet. Walking and cycling charity Sustrans Scotland has also provided funding towards construction of the new bridge through its Places for Everyone programme.

The bridge has a double deck configuration to carry services on the lower deck. It was brought to site on self-propelled modular transporters (SPMTs) and cranes were used for final installation. The installation took place directly under the airport runway approaches and so the final operation had to take place at night in a very tight window when there were no flights. 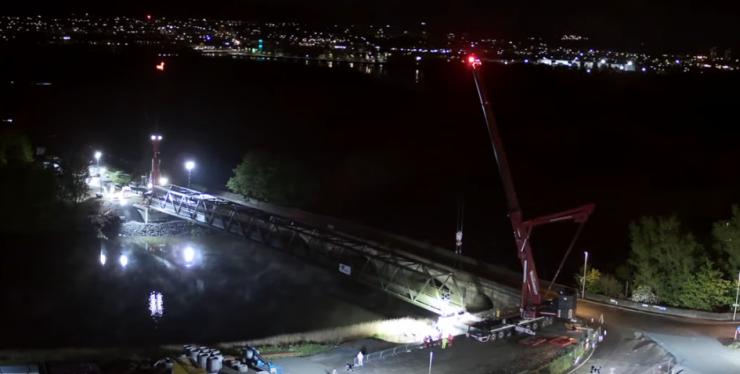 Wills Bros is now preparing the bridge for public use, including building a permanent deck and approaches to connect it into a new road layout. The contractor is also completing construction of a link bridge across the White Cart River, which will connect commercial traffic to the manufacturing district and enable cyclists and pedestrians to join onto a route being developed between Paisley and Renfrew.

Jonathan Wills, director of Wills Bros Civil Engineering, said: "Improved routes promoting cycling and walking is an important part of the project and the new pedestrian and cycle bridge over the Black Cart river is designed to create a safe, accessible route which we hope will prove popular over the coming years.” 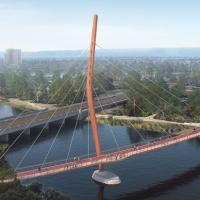