The USA’s National Transportation Safety Board (NTSB) has determined the probable causes of last year’s fatal collapse of a footbridge in Florida.

Calculation errors and inadequate peer review led to the collapse, it concluded during a public board meeting held yesterday at the conclusion of its investigations.

The NTSB determined that load and capacity calculation errors made by Figg Bridge Engineers, Inc are the probable cause of collapse of the Florida International University (FIU) pedestrian bridge in Miami.

It said that contributing to the collapse was Louis Berger’s inadequate peer review, which failed to detect Figg’s calculation errors in its design of the main span truss member 11/12 nodal region and connection to the bridge deck. A further contribution came from the Figg engineer of record’s failure to identify the significance of structural cracking observed in this node before the collapse and failure to obtain an independent peer review of the remedial plan to address the cracking, it said.

An abstract of the NTSB’s report containing the probable cause, findings and recommendations is already available online and the full report will be published in the next few weeks.

Six people died and 10 others were injured when the partially constructed FIU pedestrian bridge failed catastrophically, sending the 53m-long bridge span onto the road below and crushing eight vehicles.

The failure of Figg, MCM, Bolton Perez and Associates Consulting Engineers, FIU and the Florida Department of Transportation to cease bridge work and close SW 8th Street to protect public safety contributed to the severity of the collapse outcome, said the NTSB during the meeting.

“Errors in bridge design, inadequate peer review and poor engineering judgment led to the collapse of this bridge,” said NTSB chairman Robert Sumwalt. “The failure of all concerned parties, to recognise and take action on the threat to public safety presented by the significant observed bridge structure distress prior to the collapse, led to the tragic loss of life in this preventable accident.”

Through its investigation the NTSB made a total of 30 findings including that the concrete and steel materials used during construction of the bridge were not a factor in its collapse.

A seven-page abstract of the NTSB’s report containing the probable cause, findings and recommendations from its investigation of the collapse is available online (link opens in new tab). The full report will be published in the next few weeks.

All the investigation records had been published earlier this month (link opens in new tab). 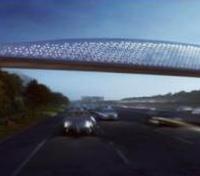