The US state of Massachusetts has approved a five-year, US$18.3 billion capital investment plan for road and bridge projects, airports, rail and transit.

The spending represents a US$1 billion increase over the previous five-year period.

Governor Charlie Baker said: “We are continuing to invest historic levels of funding into the MBTA and strengthen our roadway and bridge networks in order to provide a more reliable transportation system across Massachusetts.”

Approximately 45% of the total investments identified for the next five years will be focused on the reliability and resiliency of the core transportation system. Another 28% is devoted to modernising the system to accommodate growth and respond to new needs.

Several billion dollars have been allocated to work on the rail system, including improvements to viaducts and multiple bridges on existing lines and construction of an extension to the Green Line light railway.

Individual structures named in the capital plan include the Longfellow Bridge, which is being rehabilitated as part of a US$114.9 million upgrade of the Longfellow Approach on the Red Line. Among the projects on the existing Green Line is a US$55 million rehabilitation of the Lechmere Viaduct. 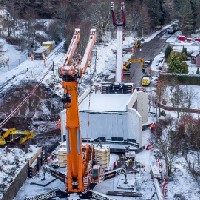