Florida Department of Transportation has announced that one lane in each direction will be open for the first 1.6km of the bridge from the week beginning 22 March.

The Pensacola Bay Bridge, which connects Pensacola and Gulf Breeze in Florida, USA, has been closed since mid-September when Skanska barges damaged the structure during Hurricane Sally. As the company hired to construct the new bridge, Skanska has spent the months since the accident demolishing damaged spans and rebuilding them, although this has hit delays due to inclement weather.

FDOT has chosen to allow some lanes to open and delay final completion of the project to boost access to businesses and tourist sites in Gulf Breeze as soon as possible.

FDOT Secretary Kevin J. Thibault, said "The fear about tourists on the beach is that once they break a pattern of coming to Pensacola Beach and go to Panama City or Gulf Shores, that pattern many times cannot be reversed, so we knew we had to have some activity by April 1."

For the damaged spans, once the deck and piers are dismantled and removed, the footings are removed from the four-pile configuration below. The old piles are being cut off at the mudline from the bottom of the bay to avoid them becoming navigational hazards.

New trophy pieces, so-called due to their appearance, comprising a waterline footer, column and pier cap are then installed. The new footings for these trophy pieces will accomodate a six-pile layout to avoid conflict with the old piling. Replacement piles are then being driven with the new trophy pieces installed on top of them. Lastly, pre-cast beams are installed atop the piers and the deck is cast in situ. 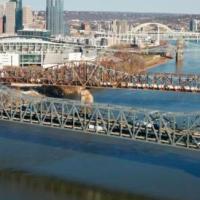