Dufferin Construction has been awarded the design and build contract for the US$14.8 million Fort York pedestrian and cycle bridge in Toronto, Canada.

The winning design is a two-part bridge that is said to be the first stainless steel bridge to be built in North America. It will extend north-south across two railway corridors in the downtown area. Pedelta is lead designer for the design-build project awarded to Dufferin.

The contract was awarded by Build Toronto, in partnership with the City of Toronto.

“This is an important piece of infrastructure, an innovative bridge that will connect three of our parks and ultimately our downtown neighborhoods,” said councillor David Shiner, who also chairs Build Toronto. “This is the first time we will construct a bridge like this in Toronto, one that is creative, accessible and great for both pedestrians and cyclists. Not only does it connect our green spaces, but it crosses above two railway corridors and will transform the way we move around downtown.”

Mayor John Tory said: “The Fort York Pedestrian and Cycle Bridge Project is an investment in smart infrastructure that connects communities, gets people moving across Toronto and is a part of the City's plan to revitalise the waterfront.”

Dufferin was selected through an evaluation process involving proposals from three shortlisted teams. Construction will begin in spring 2016 and is scheduled for completion in the spring of 2017. 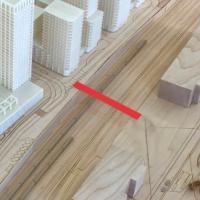