The government of Western Australia has announced that fabrication of the Swan River Pedestrian Bridge is now to take place in Perth.

The decision follows problems with the original fabrication deal, which involved production in Malaysia.

About 250 local jobs will be created for Western Australians, according to the announcement. The new programme of steel fabrication works by the intended local subcontractor is now being submitted for appropriate due diligence by quantity surveyors and fabrication specialists.

Local engineers had been raising concerns about the bridge (link opens in new tab).

The steel deck and arch components of the bridge to Perth's new stadium were being fabricated in Malaysia after the lead contractor, York Rizzani Joint Venture, subcontracted the fabrication to a Toyota Tsusho entity. Originally the bridge was due to be completed by the end of 2016, but it was plagued by delays, with the Toyota Tsusho entity repeatedly failing to meet delivery timeframes, said the government - none of the arches have yet arrived despite numerous assurances.

The bridge now has a completion target date of March 2018, with financial disincentives for delays.

Transport minister Rita Saffioti said: "The previous contract left the state government virtually powerless over local jobs, quality and completion time for the bridge. While this situation we are in is not ideal, we are cautiously optimistic about delivering the bridge in March.”

York Rizzani Joint Venture retains liability for any claims from Toyota Tsusho in respect to that subcontract.

The government said that it has engaged with the head contractor over a series of meetings to gain more control over a timely delivery of the project after the previous approach left the state virtually powerless. Under the renegotiated contract, claims arising from contract variations made under the previous government have been settled, a new target completion date of March 2018 will be set, and “meaningful” financial disincentives for late completion will apply.

A revised cost is being set for the entire project of US$60.8 million, with an extra US$2 million payable once the target completion date is met. New site assembly costs will also be incurred.

Premier Mark McGowan said: “This is a significant win for Western Australia and the best outcome for our local economy. We're securing new local jobs and have renegotiated a complex contract to give us the best chance to have the bridge delivered in time to coincide with the opening events of the stadium.” 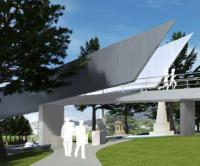